In July 2019, I went on a garden tour of Kent and Sussex organised by Brightwater Holidays.

This garden in the grounds of a historic family mansion in the Darent Valley was designed by Tom Hart Dyke who guided us around the garden. He is a modern day plant hunter who was kidnapped for 9 months by Colombian guerillas in 2000. During his captivity he had the idea for the World Garden of Plants, contained in a 2 acre walled garden, which seems much bigger. It is based on a map of the world and the beds representing countries and continents are filled with indigenous plants.

Tom has taken a lot of trouble to provide the right conditions for plants in different parts of the garden. For example, in the beds representing mainland Asia he imported acid soil to enable Rhododendrons to be planted. This was an inspirational and really unusual garden, which worked as a garden as well as a concept. There is also a ‘Hot and Spicy’ house and ‘Cloud Garden’ temperate house.

Tom was a fascinating guide and it was great to see the garden with the person who had created it.

This 7 acre garden has many beautiful and rare shrubs and perennials, including a large collection of Salvias, and an Italian garden with ruins and statues. There is a large area of woodland with attractive specimen trees, magnolias, rhododendrons and azaleas. The herbaceous borders include a hot border and cool border. 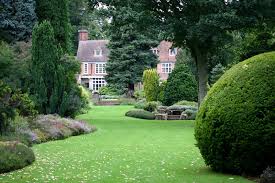 This was one of my favourite gardens on the tour, a romantic English garden with an island in a moat, many statues and sculptures, roses and Wisteria sinensis covering the southwest front of the house. 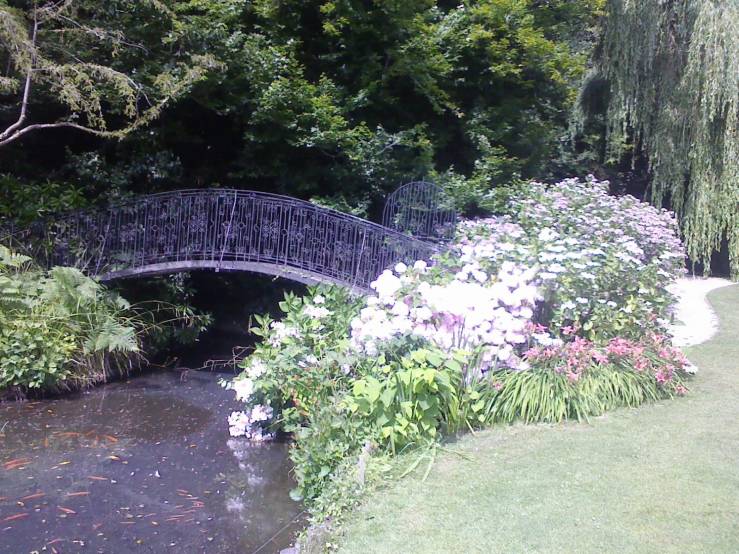 There are many beautifully planted pots and urns around the garden. There is a small fruit orchard with medlars, quinces and plums, mulched around their roots with whole fleece from Pashley sheep. This traditional method of retaining moisture and preventing weed growth also allows lanolin and nitrogen to feed the trees, and provides nesting material for birds.

I have visited this garden previously in September and really enjoyed it. This time I found it rather messy and overgrown with weeds often enveloping choice plants.

This was Christopher Lloyd’s home and garden for this whole life and he famously introduced contrasting colours and tropical planting to the garden. It includes topiary, a front meadow before the house, solar garden, wall garden, sunk garden and barn garden, upper and lower moats, exotic garden, orchard, long border, high garden and peacock topiary garden. There is also a large vegetable garden.

This was my favourite garden of the tour, famously created by Vita Sackville-West and Harold Nicholson. It includes a series of small romantic areas, with perfectly kept borders and beautiful colour combinations.

At the time of our visit, there was still a beautiful display of roses including Rosa moyesii ‘Geranium’, ‘Fantin Latour’, ‘Boule de Neige’, ‘Albertine’, and ‘Paul’s Lemon Pillar’.

The atmosphere of the garden enclosed by the Elizabethan mansion in the early summer evening was hauntingly beautiful. 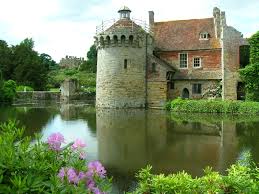 This is the garden of an Elizabethan style country house, built in 1837, with the ruin of a medieval moated manor house, Scotney Old Castle, on an island in a small lake. The ruined castle is draped with white wisteria, climbing roses, lilacs and vines and surrounded by borders with roses and herbaceous perennials. 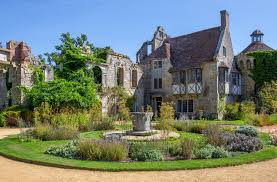 The lake is surrounded by sloping, wooded gardens,  with rhododendrons, azaleas and kalmia. 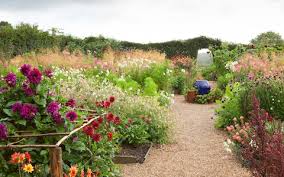 There is a large cutting garden where the central 4 beds are filled with hardy and half-hardy annuals and biennials, an Oast garden and front farmhouse garden. All the gardens represented Sarah’s inspiring and innovatory bold colour combinations.

This small garden attached to the hardy plant nursery was beautifully designed to demonstrate their great range of herbaceous perennials and ornamental grasses.