I have recently come back from 2 weeks in the UK to find that as I expected, the weed growth has been phenomenal while I was away.  I’ve spent  a  week weeding the rose and lavender borders in the front garden, and the beds around the terrace at the back.  Every day new and exciting tulips have been coming out.  Worth all the effort of planting them in the autumn!

The next week was too hot to do much in the garden during the main part of the day. However, it was wonderful to see the trees coming into leaf during the week, when they were largely still bare on the Monday. The flowering cherry looks stunning in its brief period of glory.

Whilst in London I visited Kew Gardens and Myddelton House in Enfield, and then staying with a friend in Buckinghamshire we visited Chenies Manor and Hughenden Manor. The weather was dreadful when we were at Kew and we got soaked running between  glasshouses. However the Davies Alpine House and Princess of Wales Conservatory were full of beautiful plants and plenty of colour. 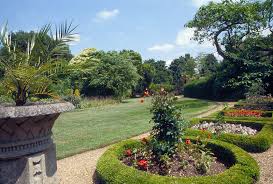 I had never been to Myddelton House before, and it is a beautiful spring garden. It was the home of E.A. Bowles (1865-1954) who was a famous gardener, plantsman and plant breeder, and also the vice president of the RHS from 1926 to 1954. There are many plants named by him or after him, including Viola ‘Bowles’s Black’, Erisymum ‘Bowles’s Mauve’, Crocus chrysanthus ‘ E.P. Bowles’, and Crocus chrysanthus ‘E.A. Bowles’ was named for him, Iris reticulata ‘Cantab’,Philadelphus ‘Bowles’s Variety’, Bowles’s golden sedge Carex elata ‘Aurea’, and Bowles’s golden grass Milium effusum ‘Aureum’.

Appropriately for the garden of someone

who was so dedicated to bulbs, the garden is full of daffodils, Crocuses and snowdrops.

An interesting area is the ‘Lunatic Asylum’ which contains unusual and bizarre plants, such as ‘Prunus laurocerasus ‘Camellifolia’ and the twisted hazel Corylus avellana ‘Contorta’. There are also some interesting glasshouses.

In this area I also visited Broomfield Park in Palmers Green where my friend June Dawes is one of the team of volunteers responsible for maintaining the fabulous collection of plants in the restored Victorian conservatory.

In Buckinghamshire I visited Chenies Manor and Hughenden Manor, both of which have interesting walled gardens. Chenies Manor was the better garden with many lovely spring bulbs, whereas Hughenden which was the home of Victorian Prime Minister Benjamin Disraeli did not have a very interesting garden, unusually for a National Trust house. However the house itself was fascinating and surprisingly not that large for such a prominent man.